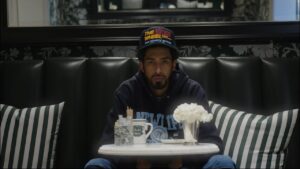 On his latest release, Dub Aura collaborated with some of New York’s best.
From the A$AP Mob and the Diplomats to Big L and Black Rob, New York has produced no shortage of hip-hop luminaries over the years, but that hasn’t prevented Dub Aura, who recently released a new 12-track album, from going in with his head held high, keen to build a name for himself among the greats.

This One Is On Me is the title of the album, which features Dapper Dan, Jim Jones, Dave East, Lady London, and Remo The Hitmaker, among others.

During an interview with HipHopDX before of the release of his album, the rising singer confessed, “I spent my entire life in Harlem.” “It instilled in me a sense of flamboyance, hustle, and self-assurance.” It forced me to focus on my goals, which are to be true to myself at all times.”

For Dub, music is more than simply a vocation – it’s a kind of rehabilitation. “When I was younger, I used to write raps that I imagined people would like while hanging out with A$AP Rocky, A$AP Ferg, Teyana Taylor, and others in cyphers. “It’s now a form of treatment,” he explained.

“I speak what I believe to be true. I speak with purpose, knowing where I’m going and where I want to be. I am aware of your situation.