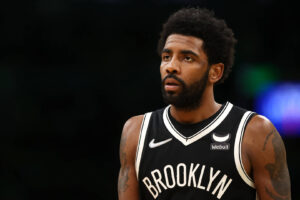 This season, Kyrie Irving and the Brooklyn Nets had a rocky relationship. Kyrie did not play many games for the Nets because he was unable to play at home due to immunization restrictions. Eventually, the mandates were lifted, allowing Kyrie to return to the court. Regardless, the Nets struggled in the first round of the playoffs, and Kyrie and the Nets will have to work out a new contract this summer.

Over the last week, there have been some intriguing reports coming out of Brooklyn. For example, there’s a rumor that Kyrie will not be offered a long-term contract because the Nets can’t stomach him being a flake for another three years. Kyrie wants a long-term deal, and the Nets don’t seem to agree with him.

According to reporter Ian Begley, things are heating up in Brooklyn, as some NBA teams believe the Nets are considering signing and trading players. If Kyrie decides to opt out, the Nets will be better off because they would be able to receive a superstar in return who is much more likely to play the entire 82-game season.

NBA teams believe Nets would be open to a Kyrie Irving sign-and-trade if he opts out, per @IanBegley pic.twitter.com/y1oVQswiOM

Throughout the offseason, Kyrie rumors will be rampant, so stay tuned to us for all of the latest news and updates.